A legendary lost queen, a lost treasure, and four Chicago friends with a surprising connection to both. 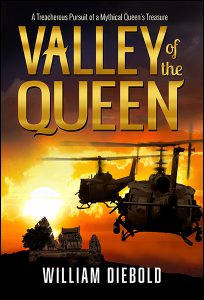 While Jack Largent is working as a photographer in Vietnam he witnesses the aftermath of a devastating rocket attack on a Cham temple. He is invited to join an investigation by a television reporter of a vile Asian despot she believes stole vast amounts of gold during the fall of South Vietnam. Tweaking her interest is an ancient legend of a treasure buried near the temple.

Jack’s involvement is further complicated when the reporter has an affair with his assistant and he falls in love with the Asian assistant of the reporter. Their romances are genuine but become complicated as they take up living together and their destinies intertwine.

The investigation takes them to Vietnam where the temple site, the legend of the lost queen and her treasure, and the possibility of the depraved mogul’s theft beckons them. Jack’s wife, Mai, has a hidden agenda and discovers a secret about herself that changes her life and causes the evil tyrant to kidnap her. Jack attempts to save her and is himself captured in the process.

What is Mai’s secret and what happened to the ancient treasure of legend? Why does Mai willingly marry the despot and what does she do when Jack shows up trying to save her?

“Sexy and suspenseful, I can’t wait for the sequel!” =D. Mercer

For more information and to download and excerpt of the book go to: http://www.valleyof thequeen.com and follow the conversation on the Valley of the Queen Facebook page.

#valley of the queen